The Little Igloo that Grew to Engage a Whole School Community 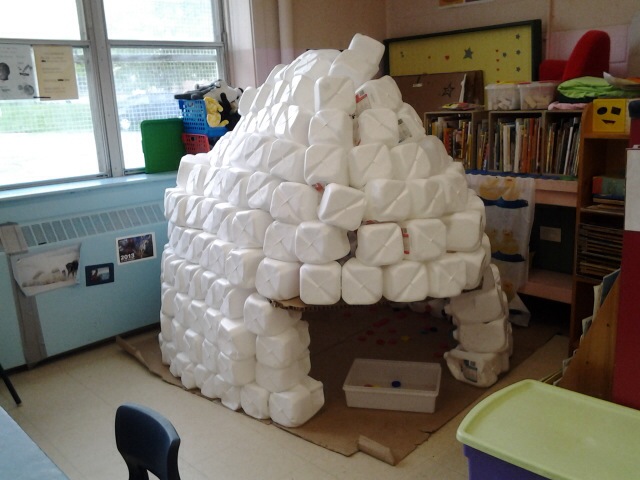 When a simple idea evolves into a full-blown project involving CNC children, adult students from all LINC levels plus the entire school – and it’s hugely successful – it‘s a story worth sharing!

/
CNC staff Sarah Dorey, Annette Carroll and Bev Carmichael from the Adult EAL program in Dartmouth Nova Scotia came upon an idea to have children build an igloo out of empty jugs. They printed a photo of a completed igloo and took the photo with a sample jug to all classes within the LINC program. Adults, including those in Level 1 and all the way to Level 7 were caught up in their enthusiasm. The photo, empty jug, some hand gestures and simple language quickly conveyed the opportunity for a fun and engaging school wide project.

As Sarah reports, “The results were amazing!”

The adult students brought in dozens and dozens of jugs and lids and the children began building. The interest in the project was so high, students had to be cautioned not to buy milk or juice if they did not need to! The children participated in all aspects of the project including sorting, cleaning and putting the lids on the jugs.

Photos to highlight the progress of the igloo were posted regularly on the school’s main bulletin board. The update also included an ongoing count of the number of jugs and lids donated. 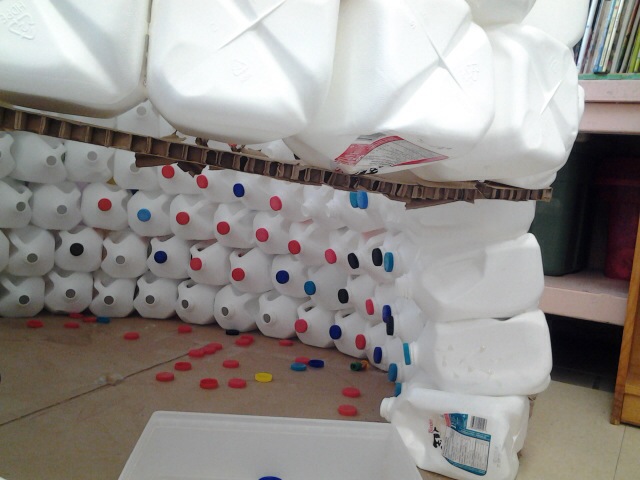 The collection of jugs and lids and the igloo assembly provided a wealth of child-centered activity. Children played and built structures with the lids, talked about different homes and how some homes are made from snow. But the project took on a life of it’s own! Building the igloo became a fun-filled school wide exercise.

The reach and impact of the project was obvious when Sarah went to post more photos one day and found a crowd of adult students surrounding the bulletin board. She saw men from class levels 1 to 5 talking about the igloo who were not parents of the CNC children. They were even talking and laughing about a photo of “teacher Annette” collecting snow outside to bring into the classroom.

The CNC ‘Nursery’ staff realized “we were really a part of the whole school. People, who had no connection to the children’s program, including men we had never seen before, were so excited to participate. It was fabulous!”

The grand opening of the igloo was incorporated into the school’s ‘Olympics Day’. Staff and children lead a parade, collecting students from each classroom along the way. The entire school assembled for an official ribbon cutting ceremony and to hear the big announcement – a grand total of over 420 jugs were collected!

The igloo project created a sense of community for the whole school. Parents connected with other LINC students and staff. A child-centered exercise resulted in school wide engagement. Ongoing storage of the igloo has been a challenge – but that’s another story!