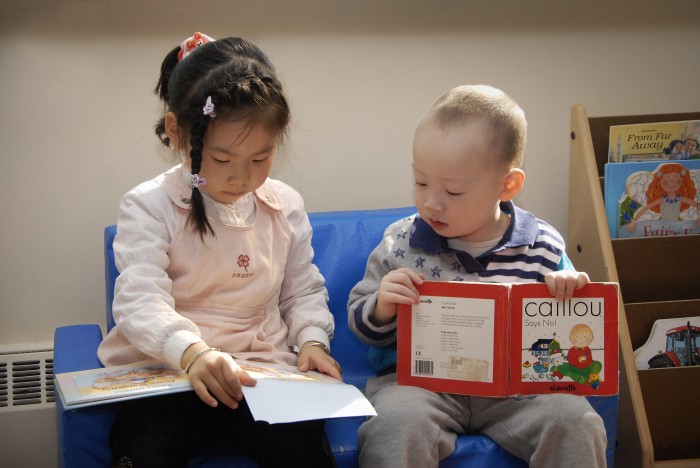 At one time or another, all child care professionals in Canada—whether in a newcomer-focused program or not—will likely look after non-English speaking children. Despite the fact that we live in an officially bilingual country that promotes the virtues of dual language learning, a common goal is to try to get young immigrant children to focus solely on English (or French in Quebec)—often at the expense of their home language. Some caregivers and parents share the perspective that if children have to eventually learn…and live…in English, then why bring their home language into the classroom setting at all?

Roma Chumak-Horbatsch, an Associate Professor in the School of Early Childhood Studies at Ryerson University, offers a different viewpoint. In her book, Linguistically Appropriate Practice: A Guide for Working with Young Immigrant Children, she makes an argument that not only can young children successfully navigate two languages, but including the home language in a program actually facilitates the learning of English.

The last principle is not surprising, given the number of studies on the subject of the benefits of bilingualism.

She also examines the flip side of the coin, when their first language is not encouraged in a program setting. Chumak-Horbatsch witnessed numerous newcomer children experiencing loneliness, isolation, discomfort and a certain degree of shame, including a desire to hide their home language. And, if these children feel there is no place for their language in the classroom, this can lead to their being effectively silenced—and even put the children at risk of losing their mother tongue.

Chumak-Horbatsch expanded on this concept at a recent workshop: “The silent stage is described in textbooks as the first stage of learning a language. But I thought if you are learning a language, why would you be silent? Most 4 and 5 year olds are rambunctious and chatty. And, the literature will tell you that the silent stage can last up to 2 years, which is troubling. So, I revisited this stage and realized that these children do not arrive in the classroom as blank language slates. They have had experience with language and literacy in their home. The silent stage is damaging to young immigrant children. But if children are quiet, then the noise level is better and the day goes by with less stress. Yet, I would argue that it is this monolingual child care agenda that silences these children. They are not silent…they are silenced.”

Is a monolingual agenda the norm? In her book, Chumak-Horbatsch evaluates three prevailing approaches by child care practitioners. The first she terms assimilative, where immigrant children are absorbed into the majority culture and language. The second—and most common—is supportive, which acknowledges and celebrates other languages and cultures, but keeps the focus on learning the classroom language. The third, and her preferred approach, is called inclusive, as the home language is included in curriculum and caregivers work closely with families to promote bilingualism.

While incorporating home languages has clear benefits, it begs the question: how can a program actively include all languages that may fill a multicultural classroom—when often times the caregivers themselves don’t speak them?

That’s where Chumak-Horbatsch’s Linguistically Appropriate Practice, or LAP for short, comes in. LAP centres around the premise that children not only can learn more than one language at a time, but that doing so will improve the process. Furthermore, she argues that the traditional views of bilingualism are no longer in synch with our global, technologically linked world. She sees languages as interactive, complimentary and dependent on each other, resulting in dynamic “translanguaging”, which is the flexible intermixing of two languages.

LAP takes inclusive practices to the next level, viewing newcomer children as “emergent bilinguals” and “focuses on their dual language and literacy needs, links their home and classroom language and literacy experiences, prepares them for the complex communication and literacy demands of the twenty-first century, and helps all children understand and accept linguistic diversity.”

Going beyond the theory, Chumak-Horbatsch’s book offers a framework, as well as practical ideas and tools, to bridge the language gap and include all languages.

The first step involves developing and promoting a language policy that is in line with the principles of LAP to guide language use and behaviours in the classroom. Once staff has internalized the policy, they need to understand the language experience of each child in their program. Beyond this, they can create home language charts that also allow children to see and compare all the linguistic diversity in the classroom. The book offers a family language survey template, as well as a sample home language chart, that can be adapted to suit a program’s needs.

Another checkpoint on the road to Linguistically Appropriate Practice is preparing the physical set-up of the room. Chumak-Horbatsch suggests building a language centre within the classroom where children, staff and parents can share, compare, use and learn languages.

Multilingualism should also permeate all other areas in the environment. Signs and posters, like those welcoming families in various languages, ought to be front and centre—and the content explained. In the reading corner, while you may already have books in other languages, they should be separated by language and their active use encouraged by staff, children and parents. As well, families can be invited to bring in books and music in their home language. Another example? For the housekeeping or kitchen area, ask parents to bring containers and packaging that showcase their culture and language.

One example of a simple and engaging activity is having the children draw their countries’ flags to create language charts that show which languages are spoken where, as well as who in the class can speak them. Another idea that children find very amusing is to show how sounds in our environment, like the sounds animals make, can vary in different languages. She uses the example of a rooster, where the English “cock-a-doodle-doo” sound changes across languages.

The set-up of the space and activity programming is only part of the multilingual equation. How you interact with the families is even more important. Some examples of Chumak-Horbatsch’s suggestions with regard to practice include engaging the entire class in the welcoming of new children and ensuring that the home languages are heard in the classroom.

Parents may have concerns about encouraging the home language in the program. Some hope that their child will be bilingual, but question the ability to learn both at the same time. Others will want their children to learn English quickly and think that speaking only English in the program—and even at home—will better help them achieve this.

“It’s important to help them realize their child’s bilingual potential,” says Chumak-Horbatsch. “You may need to change the parent perspective. You can communicate to the parents that bilingualism for their children is something important, valuable and that will help them in their life, economically and in terms of getting a job. Languages are an asset—it’s like money in the bank.”

So how can you advocate for home languages with families? You can invite parents, grandparents and other family members to be classroom partners, sharing both language and culture in a multitude of ways. Programs can also set up a language committee run by parents that helps organize language-related classroom activities and translate materials, as well as provide and distribute resources and information about community events. Organizing workshops for parents on the topic of language learning to address any concerns is another helpful suggestion. Finally, documenting children’s language and literacy behaviours through record keeping will, among other benefits, share progress with parents and track any issues or concerns if intervention is needed. For easier implementation, Chumak-Horbatsch’s book includes sample letters to parents and record keeping templates.

In the end, the success of LAP requires caregivers also believing in and committing to each child’s bilingual potential. And carrying that belief through programs and actions.